In India, If a runaway Women Tweet to Minister of Indian Government, they will use all possible resources to bring her back safe to India, even she is guilty, and treated like celebrity, Minister personally go to meet her, All media cover her story on the front page, she will be overnight STAR.
Many Indian Women married to NRIs, come back after failing to register any complaint against in foreign countries, as they verify their claim and they are not like India, Register complaints on sob stories and enable them file Fake, False cases like 498a IPC, Domestic Violence act etc. even recently Government announced they will host a portal to help such runaway brides, but in india women can do anything, even she can file Rape case on anyone even she has ever met, can turn him as murderer even that person is not in India.
But. if a Indian Man, a Soldier die on the border, who fought for the country, how many minister visit his home give their last respect.
If a Indian man who bring home foreign exchange charged falsely, how many ministers work for release them.
Here is another real life story of a forgotten Indian in foreign country on False / Fabricated charges.
Two Indian Nationals, languishing in a Nigerian jail since November 2012 after being accused of crude oil pilferage from a ship where they were working.
Others have been acquitted while the captain and assistant captain of the vessel have been held guilty. The convicted Indians are Captain Shailesh Kumar Singh, who hails from Uttar Pradesh and Assistant Captain Chandra Shekhar Sharma, who is from Rajasthan.
They were arrested by the Nigerian navy on November 25, 2012, and were charged for pilfering crude oil while working on the ship. However, they claimed that they were innocent and were falsely implicated.
Indian government has done nothing much to check details of the two convicted innocent Indians, As per tweet from Captain Shailesh Kumar Singh had been telling from Nigerian Jail that they were living in a miserable condition in the jail, and they stopped feeding and medical assistance. 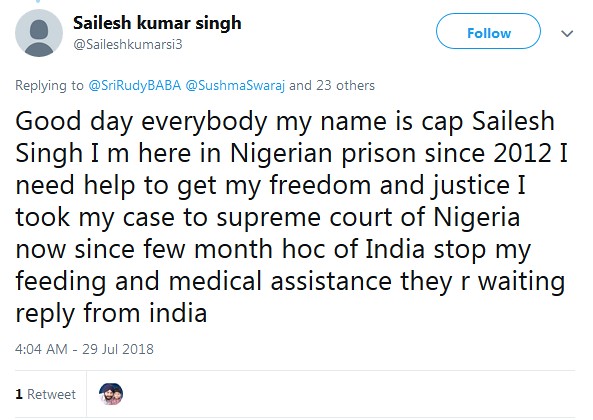 Is India becoming a morally corrupt society? Who Promote it

Mockery of Article 14 of Constitution of India

HOW TO KILL YOUR HUSBAND, AND NOT GET CAUGHT